Among the biggest problems related to equality in Brazil, there is undoubtedly the unfair disparity in the distribution of income. But that is not all. Inequality in Brazil raises several other questions that go beyond this theme, reaching the most varied aspects of life in society. This is the case of the impossibility of access to the justice system by a significant portion of the people; inequality in female representation in political instances; the existence of a significant number of students with excellent financial conditions in public higher education (to the detriment of the majority of the poor population); the need to implement social assistance programs as a way to promote equality without encouraging dependence on the State; the unequal treatment of candidates in elections by the media; encouraging unrestrained consumption as a way to awaken the feeling of belonging to an egalitarian community; obstacles to the recognition of trans gender diversity and gender identity, with strong implications for their dignity. All of these subjects were the object of in-depth and refined studies, brought together in this collective work, published on the 7th anniversary of NINC - UFPR, leaving the legacy of four books to the Brazilian legal community, which explore the relationship between Law and Justice with the seriousness that demands from a center of excellence in research at a public university.

The collaboration between Brazilian and Indian research groups, in the area of ​​Law, is something unusual and imposes great challenges. The result, therefore, could not be more promising. They are articles of high academic level, written with a critical spirit and scientific seriousness. The work seeks to achieve greater integration between the two countries, giants of the southern axis, which have many problems in common, in addition to their strong cultural differences. It is certain that a unique and rare work is being offered to the Brazilian legal community, uniting two important groups of Brazilian and Indian researchers. Perhaps the first great work of this nature in our history. In a moment of so many identity conflicts, of renewed narrow and self-absorbed worldviews, this work is a new impetus towards alterity and reconciliation between different peoples.

The ideal of freedom, one of the premises of modernity, remains in check in the 21st century. Historical experiences of totalitarianism and state, and social violence have not immunized legal systems from the dangers to individual and collective autonomy. On the contrary, the intensification of divergences, evident in the present times, shows the dangers of a setback with regard to the realization and protection of the rights of freedom. The challenge, therefore, is not only to seek the realization of social rights: it is necessary to maintain attention to public freedoms. In times of hatred and low constitutional sentiment, addressing the concrete dimensions of freedom is a requirement to maintain the horizon of meaning of the Democratic Rule of Law. The chapters of this work - resulting from research carried out by NINC - Nucleus for Constitutional Investigations of the UFPR Postgraduate Law Program - explore thought-provoking themes, in which freedom is analyzed from different perspectives, such as individual autonomy and freedom over the body itself and life itself; freedom as emancipation; freedom of information; restrictions on freedom in the name of security; freedom of communication; freedom of political participation; the immigrant's freedom; freedom and religious proselytism; freedom and political representation; freedom of speech and parliamentary activity.

Administrative law in the 21st century has undergone significant changes. Many of the concepts and theories traditionally used to explain the institutes of this legal branch - some since the 19th century - are no longer able to adapt to contemporary challenges, requiring the legal community to search for new solutions. This is the central theme of this book - ADMINISTRATIVE LAW AND ITS CURRENT TRANSFORMATIONS - which consists of the annals of the seminar of the same title promoted in honor of the retirement of Professor Romeu Felipe Bacellar Filho from the position of Full Professor of Administrative Law at the Faculty of Law of the Federal University of Paraná, promoted by NINC - Center for Constitutional Investigations of PPGD-UFPR, by NUPESUL - Center for Research in Public Law of Mercosul at PPGD-UFPR and by CAHS - Hugo Simas Academic Center, with funding from the Support Program for CAPES Country Events (PAEP). The work, composed of articles by renowned national and foreign administrativists linked to fourteen different universities, is divided into nine parts: Part I - Tributes to Professor Romeu Felipe Bacellar Filho; Part II - Fundamental social rights and Public Administration; Part III - Public Administration and Constitution: new paradigms; Part IV - Public services and their current transformations; Part V - Administrative process: contemporary challenges; Part VI - Administrative contract: new perspectives; Part VII - Civil liability of the State and control of the Administration: contemporary transformations; Part VIII - Winning articles from the Legal Articles Contest “Professor Romeu Felipe Bacellar Filho Award” and the Scientific Communications Session; Part IX - Summaries of the works presented at the Scientific Communications Session.

This book is the second written by members of the Nucleus of Constitutional Investigations in Theories of Justice, Democracy and Intervention (NINC), at the Federal University of Paraná. The reader is given the result of two years of research carried out under the Postgraduate Law Program. Interdisciplinary studies of Public Law, Economics and Theories of Justice were carried out. In the end, after reading and discussing the work What Money Doesn't Buy: The Moral Limits of the Market, by Michael J. Sandel, the group selected which subjects would be most interesting as objects of reflection. Permeated by debates among the members, the texts were constructed seeking to relate the legal view to the moral issue, always from concrete problems. Currently the object of intense reflections, the relational theme between Law, Ethics and Market was faced by the group and is now successfully made available to the community by Editora UFPR. 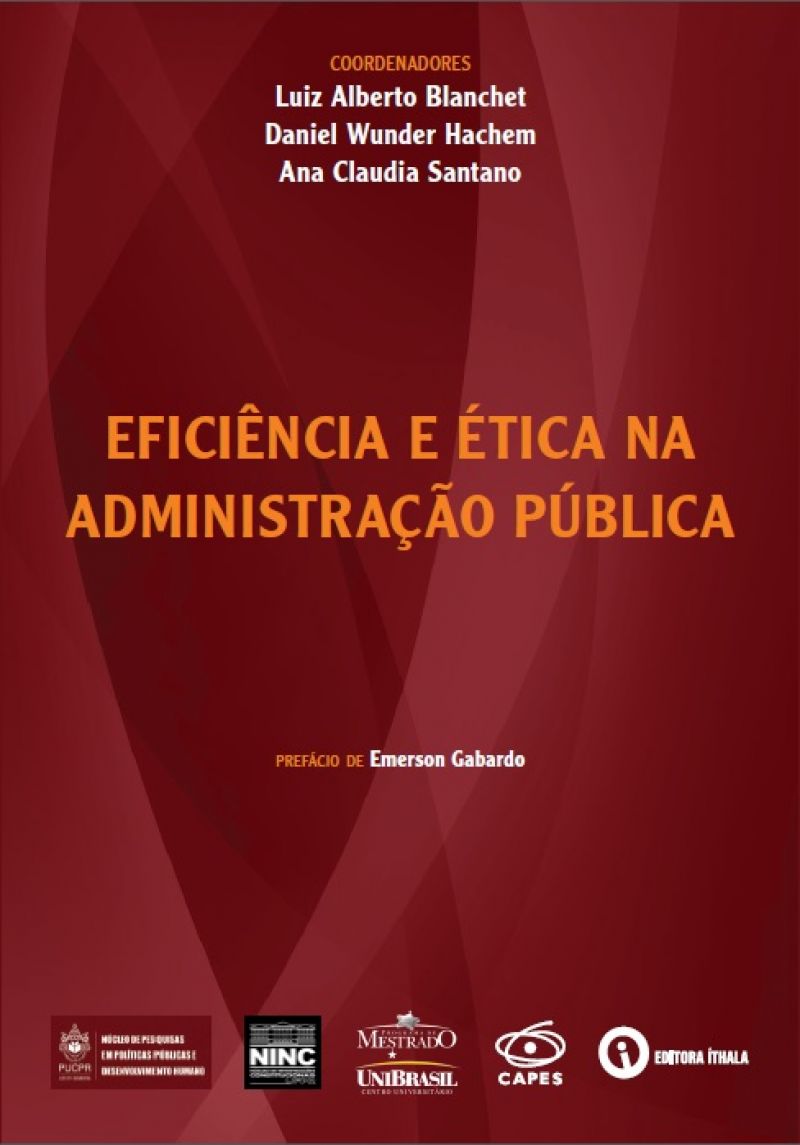 Issues related to efficiency and ethics in Public Administration, involving themes such as combating corruption, management of public services, public-private relations, lack of transparency and access to information have become central to the Brazilian and foreign legal scene, demanding the search through instruments and solutions aimed at improving good governance and the good administration of public affairs. This is the theme of this work - EFFICIENCY AND ETHICS IN PUBLIC ADMINISTRATION - composed of articles presented by national and foreign researchers (Argentina, Brazil, Colombia, United States and Peru), from eleven higher education institutions, at the International Seminar of the same title promoted by NUPED - Center for Research in Public Policies and Human Development of the Graduate Program in Law at PUCPR, by NINC - Center for Constitutional Investigations in the Graduate Program in Law at UFPR and by the Master's Program in Fundamental Rights and Democracy from UniBrasil in August 2015, with funding from the CAPES Support Program for Events in the Country (PAEP). The works were grouped into five parts: Part I - Efficient and ethical management in carrying out public services related to social rights; Part II - Impacts of inefficiency and corruption on the national development process; Part III - Instruments to fight corruption in the Public Administration; Part IV - Mechanisms for improving transparent, efficient and democratic public management; Part V - Abstracts presented in the scientific communications session.

This book is the result of research work by NINC - Nucleus of Constitutional Investigations in Theories of Justice, Democracy and Intervention. The Nucleus, led by Professor Clèmerson Merlin Clève, is composed of professors Romeu Felipe Bacellar Filho, Eneida Desiree Salgado, Emerson Gabardo and Daniel Wunder Hachem, as well as a group of high-level researchers. After almost two years of research on the subject, a work was produced that deals with an unprecedented issue in Brazil. The connection between the themes of Law and Happiness is still unknown in national theory, notably having the theme of justice as a connector. The idea was to present, from some of the great schools of thought (utilitarianism, liberalism, positivism, Marxism, libertarianism, communitarianism, deliberativism, pragmatism, republicanism and postmodernism), how it is possible to understand the most different theories of choices. Reading the work, which can be useful for both beginners and more advanced scholars, will provide a comprehensive, but in-depth knowledge, about the most tormenting questions of the foundation of contemporary public interventions.